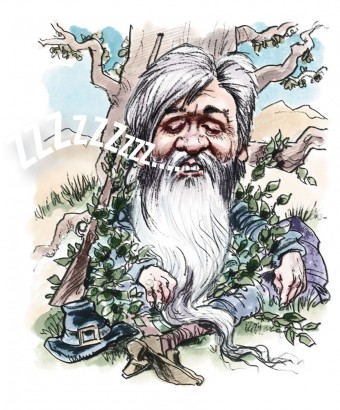 "I fell asleep at my desk many times. This was when working on events—virtually every one I’ve done in the last 5 years. I was not confronting the writing of speeches. In fact, I was not wanting to confront what I was doing at the time—being irresponsible... I am now known for falling asleep. This has happened 50 times in the last 5 years and probably 20 times at my desk in the last 2 years."
—Mike Rinder
Needless to say, Rinder was awake when he made the above confession. But waking consciousness was not his preferred state. Because, after all, to sleep is not only to dream, it’s also to shirk responsibility so that others become overworked and lose sleep.

Then again, what better way to silently wreak havoc than sleeping on time-sensitive jobs and crucial projects?

What follows here is but a sampling of incidents in testament to those immortal words: “I am now known for falling asleep.”

>>ONE: Through the course of meeting with a reporter from a national entertainment magazine, Rinder invites his guest to watch a Scientology informational video. The video is only a few minutes in length, but Rinder nonetheless manages to fall fast asleep before it ends and snores like a sailor. Needless to say, the reporter is embarrassed for him and leaves with the worst imaginable impression.

>>TWO: Through the course of a legal deposition and amidst both Church and opposition counsel, Rinder falls asleep at a conference table. It does not go unnoticed by anyone and the deponent subsequently files an Internet notice derisively describing Rinder as “dozing in the corner.”

>>THREE: During preparation of legal documents for a case critical to the Church’s well-being, Rinder again falls asleep, oblivious to the fact colleagues and attorneys are laser-like focused in the same office. As a fellow staff member later reports, this one was exceedingly embarrassing owing to outside attorneys and senior Church executives working so diligently in contrast.

>>FOUR: A frivolous suit is morphed into a serious matter, with an opposition attorney attempting to drag senior Church executives into a contentious legal battle they knew nothing about. Rinder is tasked with prepping legal documents for presentation to the court. Instead, he does nothing but sleep through proceedings.

>>FIVE: Through one of the most protracted and serious battles the Church ever faces, Rinder again sleeps his way at every critical turn.

The winning caption here: “While the very survival of Scientology hangs in the balance, Rinder remains in suspended animation.” 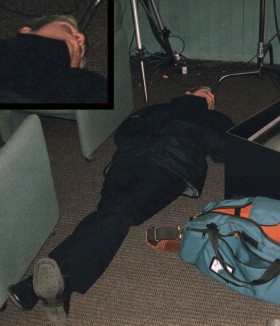 There's many another as reported to senior executives and the Church Ethics Section, which is to say that when Rinder proffered his confession, it was not news to anyone. Nevertheless, only in light of this can one appreciate just how regularly he slept when others would never have dreamed of it (and a very partial list it is)...

July 7, 2002: In the words of yet another fellow staff member, Rinder “had the nerve” to fall asleep while urgent legal preps were in progress.

April 24, 2003: Exactly 19 minutes into yet another planning session, Rinder is glimpsed dozing at a conference table. Two minutes later, he is fast asleep.

May 25, 2003: At 9:50 in the evening, Rinder is again doping off at a conference table. A brief addendum to the report reads: “His falling asleep happens continuously.”

June 24, 2003: While three divisions of Church management work on financial matters affecting Scientology Organizations world over, Rinder sleeps to ensure he has nothing to do with it.

November 7, 2003: Asleep at desk with one hand supporting chin and elbow propping up the rest, all while the speech he will deliver at a New Year’s celebration is written by someone else. (He later admits he had figured out how to turn his arms into a “tripod” to rest his head and allow sleep, and had even figured out the exact angle to place his body in front of the computer—back to the room—so one and all would think he was typing.)

November 13-17, 2003: The same staff member counts him dozing off on three occasions.

December 24, 2003: Scientology New Year’s celebrations traditionally feature story videos focusing on adventures in one or another sector of Scientology. Also a tradition as of the new millennium, Rinder snoozes in the editing bays while his seniors do the work.

February 19, 2004: A physiological breakthrough! Rinder is now able to sleep standing up!

May 9, 2004: This year’s celebration is paralleled by another cause célèbre. Rinder falls asleep no less than 10 times before the curtain falls.

October 19, 2004: Rinder makes yet another breakthrough! While appearing to read a lengthy dispatch—paper at correct distance and angle, head properly inclined—he sleeps sound as ever. (Only the fact that he never turns a page betrays him.)

December 30, 2004: Rinder celebrates another Scientology New Year’s by sleeping through speeches and story videos—ones he was supposed to present, but for which he was replaced because he was found sleeping while supposedly preparing.

March 23, 2005: Rinder discovers that speechwriting is especially conducive to dozing, for who’s to know that he’s not simply searching for that especially inspiring and evocative phrase. Consequently, and yet again, the speech must be ghostwritten on his behalf.

August 7, 2005: It’s an encore performance on the eve of another Scientology event as Mike Rinder dreams of writing a speech that will materially advance the forward thrust of Scientology. Once again, his speech is ghostwritten by his senior.

October 6, 2005: A new technical refinement! If one is seated at just the right angle and the book is held just so, no one can see that your eyes are shut and you never turn a page. Well, almost no one.

November 5, 2005: Same as above, but this time Rinder’s “prop” is the transcript of a meeting he likewise invariably slept through.

December 18, 2005: Another first! Rinder manages to sleep through an emotionally wrenching video on psychiatric brutality that will open the eyes of millions and so save the lives of thousands.

June 2007 and beyond: Rinder is finally free to sleep whenever he wishes. But nonetheless, he must rouse himself now and again lest some shameless tabloid journalist calls to buy a story he’s just dreamed up.
December 30, 2005: Rinder discovers that the Shrine Auditorium in Los Angeles, California, is an altogether fine place to nap, especially as 6,000 Scientologists assemble yet again for their annual New Year’s celebration.

That he earlier snoozed while the speech he was supposed to deliver that evening was ghostwritten by his senior, then assigned to another to deliver (because he fell asleep in his dressing room when he was supposed to rehearse), in no way disturbs his slumber. Indeed, Rinder has now proven he can sleep no matter who does his job.

March 12, 2006: After failing to produce a story video that would even vaguely wake the dead, Rinder slinks off to once more try his hand at speechwriting without falling asleep. Alas, he doesn’t quite make it.

May 2, 2006: Undaunted, Rinder prepares to write another speech, this one describing Scientology drug prevention programs. While millions the world over are benefiting from these programs, this doesn’t seem to excite Rinder. He dopes off—before managing to type a single word on the page.

June 2007 and beyond: Rinder is finally free to sleep whenever he wishes. But nonetheless, he must rouse himself now and again lest some shameless tabloid journalist calls to buy a story he’s just dreamed up.