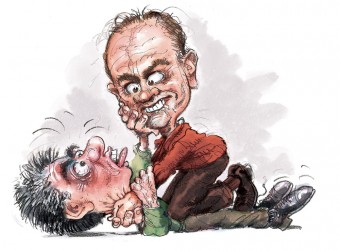 The one inescapable fact that annihilates any semblance of journalistic integrity for Anderson Cooper is best phrased as a question.

The only question more ludicrous is why Cooper—in possession of all facts from a multitude of eyewitnesses—did not press Rathbun on that very incident.

The answer is simple: Any presentation of the real facts would have destroyed the credibility of Cooper’s “star witness” and what the AC360 anchor touted as an “investigation.”

Nonetheless, provided to Cooper and his bosses:

Despite all this documentary evidence, CNN top management on behalf of their water-carrier, Cooper, might as well have turned it into confetti and thrown it out the window from their perch overlooking downtown Atlanta.

The untold story came in the form of sworn declarations—straight from the senior Church executives and staff who were there and who witnessed and stopped Rathbun’s rampage.

In one declaration, a Church executive sets the stage and bears witness to the start of the savage beating that, if gone unchecked, would have undoubtedly resulted in the death of Rinder.

As he told CNN: “During a discussion involving several other executives and staff members of the Church of Scientology International, Rathbun was present and up to that point had remained mostly silent. Suddenly and completely out of the blue, he jumped at Mike Rinder and tackled him violently to the floor while screaming at him with mostly incomprehensible words. Rathbun straddled Rinder, pinning him down with all his weight, while strangling him with both his hands and squeezing his neck.”

And, as one staffer conveyed in her affidavit, if it hadn’t been for those five men Rinder’s body would now be in a cemetery: “…choking him on the floor until he turned purple. I was scared.”

Another Church executive saw not only the choking, but what Rathbun was insanely and simultaneously doing to Rinder: “…violently tackle him to the floor… Rathbun kept on choking Rinder, while also pounding his head against the floor repeatedly.”

Yet another described to CNN the ambush-style nature of the sneak attack: “He jumped Rinder, threw him to the ground and started strangling him. It stunned and shocked everyone.”

“Several big men had to drag him off Rinder who was going blue in the face” was offered as an eyewitness testimony to Rathbun’s psychotic assault.

One of the other men who stepped in to prevent Rinder’s death said: “I, along with others, pulled Rathbun off of Rinder. He speaks of violence, there’s your violence.” 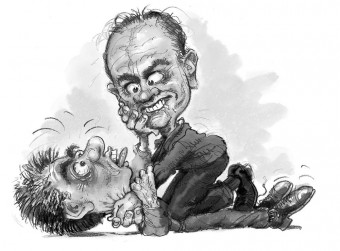 Perhaps it’s something akin to “battered spouse syndrome,” where a husband or wife, no matter the number of beatings they’ve endured, keeps returning to their abuser.

Another declaration alerted CNN to the fact that Rathbun’s rage was so out of control that, initially, after it had taken five grown men to pull him off Rinder and try to calm the situation down, the attack would only resume again, with even more ferocity:

“He grabbed Rinder by the arm, put his other arm around his back and started leading Rinder towards a side exit door. I followed them outside…the minute he got Rinder outside and the door closed, Rathbun started seriously beating Rinder up.

“He was punching him in the head and upper body and threw Rinder to the ground across a low stone wall. I grabbed Rathbun from behind and pulled him off of Rinder and he stopped hitting him. Rinder got up; he was shaken and trying to regain his composure.

“I then saw Rathbun make a fist and pull back to punch Rinder in the side. I knew where he was aiming he might rupture Rinder’s kidney. So I threw my arms around Rinder just as Rathbun was starting to punch and Rathbun’s fist hit my watch so hard that it broke the titanium band and put a deep cut in my wrist.

“At that point I screamed at Rathbun to knock it off, grabbed Rinder and led him around to the front of the building. I took Rinder inside to another room. Rinder was distraught and crying. He had contusions on his neck and face and his ear was bleeding.”

Following the incident, a bruised, bleeding and struggling-to-breathe Rinder could only say this about his mad attacker and now—perversely—his running buddy:

“Rathbun is a psychopath, he is a real nut case. He is a mental case on the loose.”

Nine individual eyewitness reports of Rathbun’s rabid violence point to the insanity of the assault and how only intervention by others prevented something even worse from happening:

Nevertheless and through a journalistic sleight of hand, Cooper conveniently and criminally allows Rathbun to try and accuse someone else of beating up Rinder—despite the fact that Cooper held all of the aforementioned evidence in his hands, evidence sworn under oath.

But amongst all that evidence, there was one witness to the Rathbun assault who knew the truth better than anyone else—Cathy Bernardini, Mike Rinder’s wife. As she told Anderson Cooper, “In over three decades with Mike, the only person I ever saw beat Mike and, in fact, almost kill him, was Marty Rathbun… I also did see the aftermath of Marty’s beating, choking and punching on Mike, so I know what it’s like.  Mike’s face was cut and swollen, his neck had contusions, his ears were cut, his lip was swollen and bruised and his chest was bruised.”

True to his agenda, Anderson didn’t air the details, apparently relegating the words “almost kill[ed] him” to be of little concern.

Yet, instead, there was Anderson seated with Rathbun who was claiming on behalf of an absent Mike Rinder that Rinder was severely beaten by another. That Rathbun was lying is hardly surprising. He wasn’t hiring himself out to the media to air the story of his life. Nobody knows who Rathbun is and his 15 minutes of fame could only be purchased by having him weave stories about others who did have a name.

But one fact cannot be denied: Cooper was irresponsible and derelict and willfully abandoned any notion of journalistic fairness by not even asking Rathbun, point-blank, about the night he almost killed Rinder because it’s a cold, hard fact that before even embarking on his so-called investigation, Cooper knew Rathbun had beaten up Rinder. To be sure, it was previously reported in the very same newspaper Cooper had originally latched onto for his broadcast.

The one remaining mystery in this all-too-pathetic saga may never be solved, nor even comprehended: Rathbun, after nearly killing Rinder, is now, as he says, “best good buddies” with his former victim.

It begs the question: What is the true nature of their relationship?

Perhaps it’s something akin to “battered spouse syndrome,” where a husband or wife, no matter the number of beatings they’ve endured, keeps returning to their abuser.

Or perhaps it’s something else.

Whatever the case, it’s clear from the CNN broadcast the two are figuratively in bed with each other on their media-for-hire tour.

In that regard, it’s the self-fulfilling prophecy of Rinder himself, describing the cause of his downfall into the black pit of oblivion:

“I emulated Marty…I thought he was the person I should act like—and I did. I became a clone of him but totally subservient to him in all respects—I never disagreed with him on anything and had tacit agreements with him that anything he did or said was OK.” —Mike Rinder

Postscript: Rinder was recently asked by a Scientologist how he could be in bed with Rathbun, who beat him to a pulp.

His answer? “It was just once.”

Of course, that’s a complete lie. Rathbun himself has admitted to numerous assaults on Rinder. But either way, this last infamous beat down would have been the last had five of his then-colleagues not intervened—the five colleagues he now attacks in the media. All of which, if nothing else, tells you the kind of man Rinder is. One would have expected, at the very least, a “thank you” for saving his life.